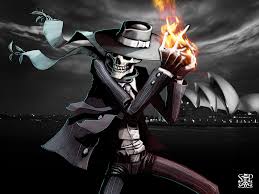 And the last chapter! Now, regrettably, it will slow to once a fortnight?? I dunno. But, it will be continued! (You reading this Karabelle? I don’t know what I will do if you don’t complete it but it will be bad! Sincerely, Laurena.)
Chapter 6
After hours of wandering the woods, all sense of direction, if they even had any at first, was lost. Tanith and Valkyrie trudged through the undergrowth, cutting a path through the trees. They found their own track every so often, getting more frustrated every time. They were hot. They were hungry. They were exhausted.
“This is hopeless,” Val said, exasperated. She had even tried to fly up a few times but found that she couldn’t break through the thick layer of branches that made up the canopy.
“Ghastly should be here by now,” Tanith said. Whipping around to face Val, she added, “What if he thinks that I didn’t show up?”
“Don’t worry, Tanith! Everything will be okay,” Val spoke calmly, “He’ll know something’s wrong and get a rescue party going. And he wouldn’t let up until you were found.”
Tanith frowned, “You mean us, right?”
“Nope, just you.”
“Oh,” she paused for a second before adding, “Would he really do that?”
“Of course! What, can’t you tell that he’s head over heels in love with you.”
“Not really, no.”
“So you haven’t noticed the way that he doesn’t take his eyes off you every time you see each other?” Val said smugly, “And the way you look back…”
Tanith was blushing now, turning a deep shade of red. “Is it really that obvious?”
“You’ve got to be kidding me! Almost everyone back at the sanctuary has bet on when you’ll officially become boyfriend and girlfriend.”
“And what do you think?” Tanith questioned.
“Within the next week or so,” Val replied slyly, “I mean, really. You two, on your own in the woods, having a picnic. All alone. By yourselves. No one to interrupt you. What else would it take?”
“Uh, maybe not being hopelessly lost in the woods while being late for a date with no service to call anyone?”
“Yeah, I guess…”
“But really, what are we going to do?”
Sitting down on a large root, Val sighed and gestured for Tanith to join her. “I don’t know…”
“Well, our best hope now is to sit and wait ’til someone finds us.”
They sat in silence for a moment and Val looked up at the trees and the speckles of sunlight shining through the tiny gaps in the leaves. She looked at the forest floor and watched the sunlight dance across the dead leaves. When the trees swayed and moaned, everything in the forest moved with them, a pattern of gentle movement. Suddenly Tanith perked up.
“Do you hear that?” she exclaimed.
“No, what am I meant to hear?” Val said puzzled.
“It…it…it’s Ghastly!”
“Really!? What direction is it coming from?”
“Umm…” Tanith paused for a second before saying, “That way!” She pointed back the way they had come.
Val groaned, “Are you sure?”
“100% positive,” Tanith grinned.
“But that means that we have been walking further and further away from the house!”
“And now we know which way to go, so come on!” Tanith stood up and started running towards the sound of Ghastly’s voice.
“Slow down,” Val called after her. She couldn’t help but grin back as Tanith glanced back her, a smile still on her face.
She was crazy.
Crazy in love…